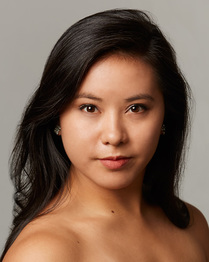 Tiare Keeno is a dancer originally from Utah. Growing up, she received her dance training from Ballet West Academy and Classical Ballet Academy. As a current fourth-year dancer at The Juilliard School, she has been privileged to work with renowned choreographers such as Kyle Abraham, Camille Brown, Brian Brooks, Kate Weare, Victor Quijada, Cindy Salgado, and Jonathan Alsberry. She has performed works by Twyla Tharp, Jose Limon, and most recently Martha Graham where she performed the lead role of “The One Who Seeks” in Dark Meadow for Juilliard’s Spring Concert 2015.

Tiare has also performed professionally with the Radio City Rockettes in their Christmas Spectacular show and has appeared as a guest artist at the International Ballet Festival of Miami. At seventeen years old, she was a full-time company member of Nevada Ballet Theatre where she also collaborated with Cirque du Soleil. Tiare has performed with Brian Brooks Moving Company at the Fall For Dance Festival as well as the Guggenheim Museum’s “Works and Process” and at BAM Fischer with Kate Weare Company. Tiare has attended Springboard Danse Montreal where she performed works by RUBBERBANDance Group and Aszure Barton and Artists. She is also a member of a student-initiated company, DareToCreate Dance Collective and a faculty member of FRESH Dance Intensive in Canada.
Click the image above to enlarge
Click to read more about artists