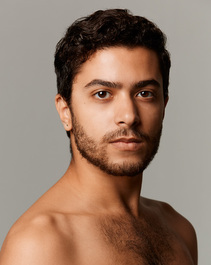 Joseph was born and raised in the beautiful hills of upstate New York, and can be identiﬁed from a distance by his cacophonous laughter. During his time at Juilliard, he has had the opportunity to perform the works of José Limón, Twyla Tharp and Martha Graham as well as having the pleasure to work with choreographers such as Camille A. Brown, Brian Brooks, Kate Weare an Kyle Abraham. His summers have included attending Springboard Danse Montréal and Nederlands Dans Theater summer intensive, where he has been able to perform works of Crystal Pite, Sol León and Paul Lightfoot, Shannon Gillen, Joeri Dubbe and Sylvain Emard.

​Joseph has had the opportunity to perform with his classmates alongside Brian Brooks Moving Company in New York City Center’s Fall for Dance, as well as being a part of         Kate Weare’s residency at BAM Fisher Hall. He is also a founding artist of DaretoCreate Dance Collective.

Prior to Juilliard he ﬁnished his dance training at The Draper Center for Dance Education, where he became a trainee for the Rochester City Ballet from 2010-2012.
Click the image above to enlarge
Click to read more about artists