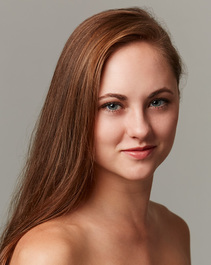 Hope Dougherty is a native of Colorado and has been dancing since the age of four. She recently returned from Springboard Danse de Montréal, a summer program with artistic director, Alexandra Wells, in Montréal, Quebec. At SBDM, she spent her time collaborating with world renowned choreographer, Fernando Melo as well as creating a new work by emerging choreographer, Yin Yue. Over the years, Hope has attended summer programs including San Francisco Conservatory of Dance, American Ballet Theatre, Bolshoi Ballet Academy on scholarship, Kirov Ballet Academy and The Juilliard Summer Intensive.
​
Hope Dougherty is entering her final year in Juilliard’s Dance Division. As a first year student, she performed a contrasting range of dance styles including the improvisation-based choreography of Camille A. Brown and a classical modern work of José Limón, Missa Brevis. In her second year, Hope was given the privilege of collaborating with upcoming choreographer Brian Brooks in his new work, Torrent; she then participated in a restaging of this work in the 2014 Fall for Dance Festival. Hope travelled with the Juilliard ensemble to the 2014 Chicago Dancing Festival where she repeated her soloist role in Eliot Feld’s ballet, The Jig is Up. She was also given the honor of revisiting Missa Brevis as a soloist in Juilliard’s Spring Concert. In her third year, Hope and her classmates were excited to repeat a performance of their New Dances work by Kate Weare at BAM in Weare’s 10th year anniversary show. Most recently, Hope was given the privilege of performing a full ballet of the legendary Martha Graham, Dark Meadow, as the leading female principle role. Now entering her senior year, Hope is looking forwards to traveling to across the globe to find her niche in the dance community and further her curiosity and exploration of movement both on and off the stage.
Click the image above to enlarge
Click to read more about artists