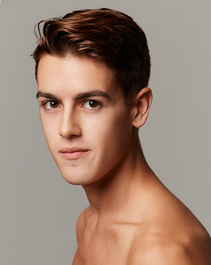 Brennan Clost, an artist from Ontario, Canada, began his performance career at a young age with a big heart for dance. In pursuit of his dream to be a professional dancer, Brennan was driven by his intense desire to never give up. He has acclimated himself to a highly competitive and versatile dance career. He is experienced in diverse styles of dance including the Graham, Horton, Cunningham, Limon, and Gaga modern techniques, as well as ballet, jazz, tap, hip-hop, acro, and contemporary. He has studied at various dance studios across Southern Ontario, as well as at the National Ballet School of Canada and Springboard Danse Montreal. Currently a fourth-year dancer at The Juilliard School, Brennan has been fortunate to be a part of new creations with choreographers such as Kyle Abraham, Camille Brown, Brian Brooks, and Kate Weare. These experiences led to performances at professional venues such as New York City Center’s 2014 Fall for Dance Festival in a restaging of Brian Brook’s “Torrent,” as well as a performance at BAM Fisher for Kate Weare’s 10 year anniversary show. In addition, he has performed works by Twyla Tharp, Jose Limon, and most recently Merce Cunningham’s Biped for Juilliard’s 2015 Spring Concert.

Brennan was a part of the FRESH Dance Intensive faculty as a teacher and assistant, together with other Juilliard students and alumni, and has recently joined the faculty for PURE Dance Intensive and On The Floor. Brennan’s choreography has been showcased in The Juilliard School’s Choreographic Honours Program annually, and at elementary schools throughout New York City as a part of the PEPS Outreach Program.

Throughout the years, Brennan has been able to break into the world of acting, alongside his intense dance career. Brennan’s current project is the Family Channel series The Next Step, on which Brennan plays one of the lead characters Daniel, now airing in it’s third season internationally. Brennan is inspired to expand his artistry in dance as well as hone his talents as an actor.
Click the image above to enlarge
Click to read more about artists